Ideas for Starting a GeoPlunge Tournament 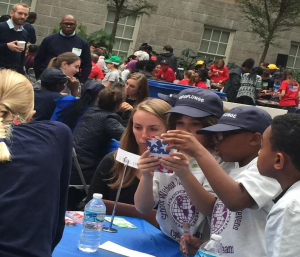 The excitement is palpable as 250 third to eighth grade students gather in a large atrium at the Smithsonian Institution’s National Portrait Gallery waiting for the GeoPlunge tournament to begin. As the day progresses, the enthusiasm grows as students use their knowledge of the United States, including capitals, big cities, state rankings of size, population, when states entered the Union (and who was President at that time), state borders and tons of U.S. trivia. These D.C. Public School students, many from Title I schools, are eager to show off their considerable knowledge and game strategy skills.

GeoPlunge tournaments have been such a staple in the D.C. area over the last twelve years that the activity is featured on the D.C. Public Schools website. They are great fun and bring together students, teachers, parents and area businesses. So, how can you create a tournament in your area?

It’s easy to divide a class into teams (generally groups of three), teach them to play a few different games, let them practice and hold a classroom tournament. In our tournaments, teams play head-to-head against other teams and then rotate around the room– that’s part of the fast-paced fun.

Each round is about 20 minutes and the students play 3 to 5 games during that 20-minute period. For schools new to the program, we recommend the following games (the rules of which can be found on our website):

Combining these games works very well, as they vary in terms of being more knowledge-based, strategy-based, or activity-based.

Whichever team collects more points during the 20-minute period wins that match. Then teams rotate and play a different team for the next 20 minutes.

Whichever team wins the most matches is the GeoPlunge champ. If there are ties, play-off matches can determine a winner. During the play-off phase, we recommend that all teams continue to play so there is no down-time for any team. We have even had teachers create NCAA-style brackets and consolation brackets for their GeoPlunge classroom tournament.

Tournaments Where Classrooms Within One School Play Each Other

The fun only increases when you bring multiple classes into the mix. Multi-classroom tournaments can be coordinated through the a school specialist such as a curriculum specialist or the school librarian. Several schools run GeoPlunge programs through the school librarian where the different classes learn the games and practice during library time.

Some of our early tournaments consisted of a small number of schools that were in close proximity to one another. Area law firms organized these tournaments with the help of the business partnership arm of the Washington Lawyers Committee for Civil Rights Under the Law. But it would be easy for PTAs or other groups to organize a small tournament. Tournaments can be held in the school cafeterias or gyms.

When my son was in high school, he set up a GeoPlunge club with a teacher sponsor and he and his friends went to their old elementary school and ran an after-school GeoPlunge club there. The parents loved it because it was an educational club. The elementary school students enjoyed learning and playing the game. And the high-schoolers enjoyed mentoring the younger students and they had no problem earning all of their community service hours in a fun and fulfilling way.

We are not yet aware of any Skype or Google Hangout tournaments that have taken place, but there has been talk of trying this method. Having tournaments between classes in different cities would add another dimension to a geography-based game. We can help match schools and coordinate tournaments for schools interested in trying a virtual tournament.

There are so many benefits to bringing your community together for a fun and educational activity. We’d love to help you get started.

Robin Hayutin is the Executive Director at LearningPlunge, Inc., a non-profit organization that builds communities one tournament at a time.