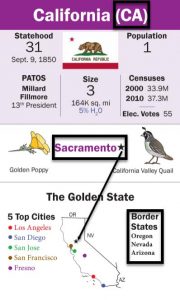 Objective: Students will analyze information about states by drawing connections among abbreviations (postal codes), capitals, and/or border states by region as well as understand and analyze why learning this information is important.

Use the “Introduction to GeoPlunge Cards” lesson prior to practicing with these cards. This activity may be done as a whole class or a small group.

Before playing the first time, the teacher will engage students by asking probing question(s):

Playing the Game: We will now play a game learning state capitals, abbreviations, and border states.

Remind students where to find the information on the GeoPlunge cards.

Create teams of 1-3 students.  Two teams play against each other.   If there is an odd number of teams, that team becomes the teacher helpers for the game and rotate in the next round.  The goal is for each team to use clues such as capital, postal code, and list of bordering states to guess the name of the state held by its opponents. 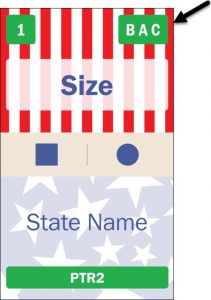 Step 2: Turn over the top Power card in the deck face-up in the center of the playing area.  If playing as a whole class, the teacher should show the Power card to the entire class by holding it up or showing it on a Smartboard.  Use the sequence of the letters A, B, and C in the upper right corner to give clues.

Note:  If the card has AAA, BBB, or CCC, start with that clue and then the clue-giving team chooses the order of the remaining clues.

Step 4: After the first guessing team correctly guesses the name of the state held by its opponent or has made 3 incorrect guesses, the teams switch roles.  Use the same Power card for both teams. The second guessing team does not continue to guess once it has won or lost even if it has not made all three guesses.

Step 5: After playing, collect the GeoPlunge cards.  Hand out new GeoPlunge cards to each team and play again, using a different Power card.   Play the game for a designated time period.

Follow up: After playing the game each time, provide a brief opportunity for students to share their experience.  Use the “GeoPlunge Self Assessment” resource.  Or have a quick class discussion with possible. (Connections to the real world, improvement in content mastery,  learned strategy, error analysis, funny story, self-reflection, etc.)

Breaking down the deck: There are four US Regions based on the United States Census Bureau. Different resources, however, identify different regions and states per region. Use the resources that work best for your learning goals.