Cards Used: GeoPlunge cards. Shuffle the cards before the game begins and after each race.

Objective: This game is a series of races! During each race, each team tries to find winning groups of cards as fast as it can. The border states of each state determine the winning groups, as described below. A team receives 2 points for winning a race, and in Level 2 it also has the opportunity to earn a bonus point (i.e., a third point) as described in those rules. Teams receive 1 point each for a tie. Play a race at a time until one team wins the game. For Level 1, a team needs 10 points to win the game, and for Level 2, a team needs 15 points to win. 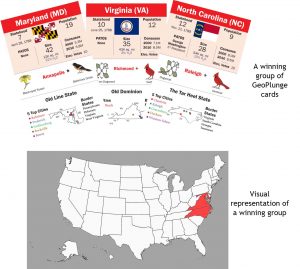 Step 1: Deal each team 18 GeoPlunge cards face-down. Teams do NOT turn over or look at their cards until everyone at the same time says, “Ready, Set, GeoPlunge!”

Step 2: The teams then turn over their cards and the race begins. Each team tries to create 2 winning groups from the cards it was dealt. A winning group of cards consists of 3 cards where one state in the group borders both of the other states in the group. For example, the states Maryland, Virginia, and North Carolina are one group because Virginia borders both Maryland and North Carolina. A team cannot use the same card in more than one group.

Step 3: A team shouts “GeoPlunge” as soon as it finds 2 winning groups.