Cards Used: GeoPlunge cards. Shuffle the cards before the game begins and after each race.

Objective: This game is a series of races! During each race, each team tries to find winning groups of cards as fast as it can. The border states of each state determine the winning groups, as described below. A team receives 2 points for winning a race and also has the opportunity to earn a bonus point (i.e., a third point). Teams receive 1 point each for a tie. Play a race at a time until one team wins the game. A team needs 15 points to win.

Level 3 is played exactly the same way as Level 2 with the exception of the sentences and other words in below that are in red.

Step 1: Deal each team 18 GeoPlunge cards face-down. Teams do NOT turn over or look at their cards until the dealer says, “Ready, Set, GeoPlunge!” 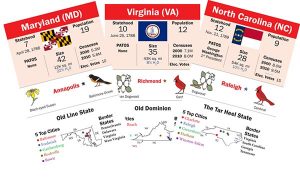 Step 2: The teams then turn over their cards and the race begins. Each team tries to create 2 winning groups, or 3 winning groups if it wants to earn the Bonus Points, from the cards it was dealt. A winning group of cards consists of 3 cards where one state in the group borders both of the other states in the group. (For example, the states Maryland, Virginia, and North Carolina are one group because Virginia borders both Maryland and North Carolina.) Teams must also properly sort the cards within each winning group so that the state that borders the other two states is in the middle of the card group. If all three states in a group border each other, it does not matter which card is placed in the middle. A team cannot use the same card in more than one group.

Level 4 is the same as Level 3, with the following exceptions:

Deal each team 21 GeoPlunge cards, instead of 18 cards, face-down. Each team tries to create 2 winning groups, or 3 winning groups if it wants to earn a bonus point, from the cards it was dealt. The winning groups of cards consist of either: 1) two groups of 4 cards, or 2) one group of 5 cards and one group of 3 cards. For a team seeking the bonus point, the third winning group consists of 3 cards. For a group to be a winning group, there must be two “end states” in which you could travel from one of those states to the other by traveling once through portions of every other state in the group, but you would not need to travel through any state that is not in the group. That is, you could draw a line from one end state to the other, which line would cross portions of every other state in the group once, but would not cross any state that is not in the group. See examples below.

Teams must also properly sort the cards for each winning group in the order described above, i.e. the end states on the ends, and each other state sandwiched between two states that border it. A team cannot use the same card in more than one group. 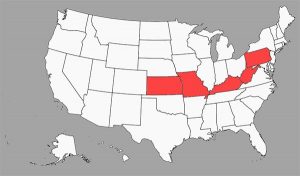 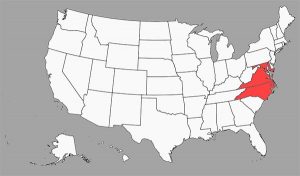 Additional examples of what winning groups of GeoPlunge cards could look like on a map: 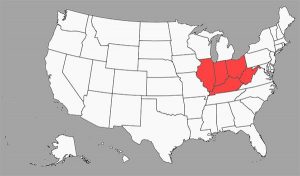 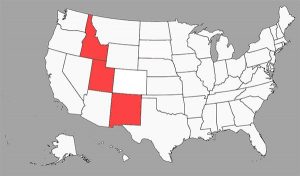 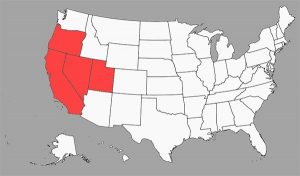 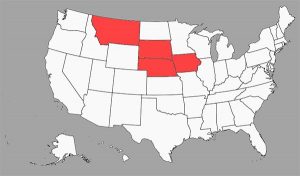 Examples of what non-winning groups of 4 would look like on a map: A group of 4 GeoPlunge cards consisting of Kansas, Iowa, Missouri, and Arkansas would NOT work because, as shown on the map below, it is impossible to travel to all 4 selected states without either going through Missouri twice or travelling through a state that is not in the group. 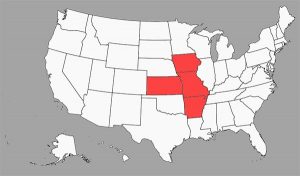 A group of 4 GeoPlunge cards consisting of Colorado, Nebraska, Kansas and Texas also would not work because Texas does not border any of the other states (see map below). 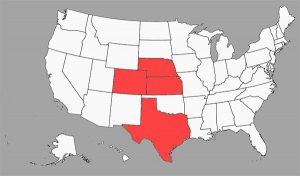