Chummy Challenge is an advanced game and used in combination with only Level 3 and Level 4 games. 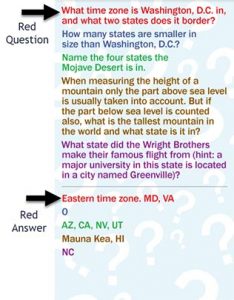 Information about the Challenge Cards: Each Challenge card contains five questions and answers. Some questions require multiple answers for a correct answer. The questions are color coded and are referred to as the “red question”, “blue question”, etc.

Objective: A game of Chummy Challenge™ is a series of challenges. During each challenge, each team tries to answer a question from the other team’s Challenge card. If each team correctly answers the question it is asked, or neither team does so, that challenge ends in a tie.  If only one team correctly answers its question, that team wins that challenge, and it gets an opportunity to earn a bonus point, as described below.  Play a challenge at a time until one team wins the game.

Step 1: Deal each team one Challenge card and one Power card.

Step 2: The teams look at their cards but do not show them to their opponent. Each Power card has either a red or blue square in the left center of the card, and that square identifies the color of the question that the team asks from the Challenge card it was dealt. For example, if a team is dealt a Power card with a red square, see example, that team will ask the red question from its Challenge card.

Determining Who Wins this Game: If a team wins a challenge it receives 2 points, except if it also earns the bonus point it receives 3 points for winning that challenge.  If a challenge ends in a tie, each team receives 1 point.  The first team to earn 15 points wins the game.

The structure for this game is the same as above with the following exception:

On the Power card, use the one or two colored circles in the right center of the card to identify the color of the question to ask. If a team is dealt a Power card in which there are two circles on the card, that  team decides which one of those two questions to ask. For example, if a team is dealt the Power card, see example,  it may ask either the blue or green question from its Challenge card, whichever it prefers.