We believe that within every child lies a passion for learning. LearningPlunge is a 501(c)(3) with a mission to ignite that passion through educational games in which critical thinking, knowledge, and fun are rolled into one.™ LearningPlunge has a proven track-record of successfully teaching children about the U.S., fostering a love of learning, and of connecting communities of businesses, parents, teachers and children together one tournament at a time.™

GeoPlunge, our flagship program, was invented by Alan Fishel, a Washington D.C. lawyer. While coaching his son’s third grade soccer team, Alan discovered that nobody on the team could name the home states for Miami, Seattle and Detroit. Alan set out to change that — and GeoPlunge was born.

When I invented GeoPlunge, I wanted to create a game that would teach U.S. geography in an exciting and engaging way that would not feel like learning. I also wanted it to be fun for adults so families would want to play together. We tested the game in all kinds of schools, including Title I schools, gifted and talented centers, and regular classrooms and found that all types of learners enjoyed the game.

In 2004, we held our first GeoPlunge tournament in a Title I school where my law firm has a business partnership. The enthusiasm in the school that day was overwhelming. This was a school with no frills. At the time, there weren’t instruments or any equipment in the music room where we held the tournament. Yet the students were passionate about the game and they didn’t realize how much they were learning.

Building on that success, we have developed HistoryPlunge in collaboration with the Smithsonian’s National Portrait Gallery. HistoryPlunge is modeled after GeoPlunge with a variety of fast-paced games and it is within the core of the social studies curriculum. It is our goal with these games to provide a fun way to help close the knowledge gap.”

Based on that experience, I approached the Washington Lawyers Committee for Civil Rights and Urban Affairs, which organizes partnerships between Washington, D.C. schools and city businesses and law firms. Together we held our first multi-school tournament with eight schools participating. And it’s taken off from there. 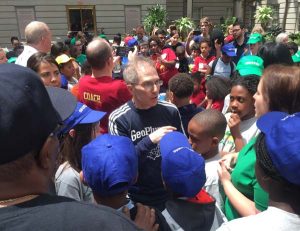 Today, we hold two tournaments a year in Washington, D.C. with 350 – 400 students participating in tournament play each year and far more participating in GeoPlunge clubs held in a number of those schools. In some schools, teachers or specialists like librarians coach the teams. In other schools, volunteers from local law firms and businesses go into the schools on a regular basis and coach the students in the GeoPlunge clubs. We’ve heard of many groups of students in these clubs bonding over GeoPlunge as if they were on a sports team. And while this activity involves education rather than sports, there are similarities, such as how engaged and excited the children are while playing and how important teamwork and sportsmanship are to their ultimate success.

LearningPlunge is committed to providing quality learning experiences to help close the knowledge gap. To that end, we are pleased to introduce two new programs in 2019, HistoryPlunge and our GeoPlunge Dashing States digital app.

HistoryPlunge follows the GeoPlunge model but focuses on U.S. History from 1492-Present. Like GeoPlunge, HistoryPlunge includes many games that can be played at different levels so it is appropriate for students in elementary school through high school.

Our GeoPlunge Dashing States map app is now available through app stores for download. It can be used on its own or as a supplement to GeoPlunge. 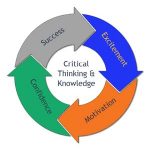 We have been told many stories about how being involved in GeoPlunge has spilled over into other subjects by motivating students to gain strong study and preparation skills that they then use in their other classes, while also giving them confidence that they can succeed in learning and bolstering their self-esteem. In short, we have seen it create a virtuous circle of educational success by getting students excited about learning, which motivates them to learn more, which gives them confidence that they can learn and succeed at a very high level. And the circle continues as we continue with GeoPlunge and the addition of HistoryPlunge.