Cards: The cards used in Combo 2:

Format: A Combo 2 tournament is played a round at a time, and participating teams should
have 3 players. In each round, each team plays another team in a head-to-head match. Each
team plays four matches in the morning in rounds that last 20 minutes each, and four matches
in the afternoon in rounds that last 12 minutes each. Teams switch who they play after each
round. After each team plays eight matches (i.e., one per round), the championship match is
played between the top two teams to determine the champion. Use the rules for Level 2 games.

Shuffling and Scoring: Shuffle the decks as needed during a match. Scoring is the same for
each game.

GeoPlunging does not impact the play of the game and is similar to raising the stakes in a game
of poker; a team, by GeoPlunging, is simply increasing the amount of points the winning
team will receive for that game. For each game, each team decides if it wants to GeoPlunge
for that game. That happens in the following manner: At the time specified in the game rules,
the dealer will simultaneously ask the teams, “Are you GeoPlunging? TM ” and then slowly count
to 5. For a team to indicate that it is GeoPlunging, the person closest to the dealer must be
standing by the time the dealer reaches 5.

Example of point totals: If a winning team for a game earns the Bonus Points and both
teams are GeoPlunging, it receives 40 points for that game.

Objective: This game is a race! Each team tries to find winning groups of cards as fast as it can. The border states of each state determine the winning groups, as described below.

Step 1: Determine which teams are GeoPlunging for this game (see description in the overview). Then deal each team 18 GeoPlunge cards face-down. Teams do NOT turn over or look at their cards until the dealer says, “Ready, Set, GeoPlunge!!” 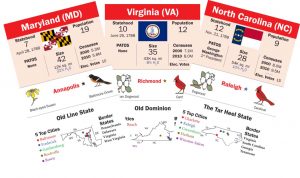 Step 2: The teams then turn over their cards and the race begins. Each team tries to create 2 winning groups, or 3 winning groups if it wants to earn the Bonus Points, from the cards it was dealt. A winning group of cards consists of 3 cards where one state in the group borders both of the other states in the group. (For example, the states Maryland, Virginia, and North Carolina are one group because Virginia borders both Maryland and North Carolina.) A team cannot use the same card in more than one group. 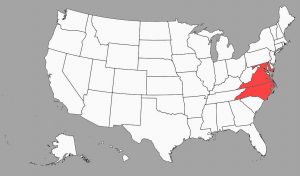 Step 3: A team shouts “GeoPlunge” as soon as it finds 2 winning groups, except that if it is trying to earn the Bonus Points, it should wait until it finds 3 winning groups and then shout “ThreeOPlunge.”

Objective: Each team has up to 3 guesses to guess the state held by its opponent. Each team gets 2 new clues before each guess that it makes.

Step 1: Deal each team 1 GeoPlunge card face-down. Each team looks at its card. Teams then decide if they are GeoPlunging for this game. (See description in the overview.)

Step 2: The dealer then turns the top Power card in the deck face-up. Teams use the order of the letters A, B, and C in the upper right corner of that Power card to give clues from two Clue cards before each guess.

For example, if the Power card turned face-up has BAC in the upper right corner (see example) each guessing team will receive two Type B 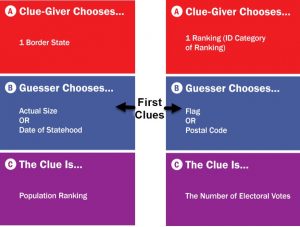 For Type A and B clues, there usually will be options for which clue is provided as described by the Clue card. If the clue-giving team is required to show its opponent the state flag, use the cut-out card to hide all of the information with the exception of the state flag.

The dealer will turn over 2 new Clue cards before each guess. Used Clue cards are placed at the bottom of the deck.

Step 3: The first guessing team has up to 3 guesses to try to guess the state of the GeoPlunge card in the other team’s hand. 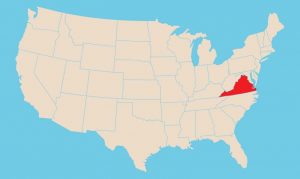 Objective: Dashing States™ is a series of races! Whichever team wins 2 races wins this game. During a race, each team tries to identify the states in red on 6 of its 7 Map cards so that it can sort those cards in alphabetical order as quickly as it can, as described below, and the first team to do so then announces the state names and capitals of those states. There is only one state in red on each Map card.

Step 1: Before the first race, determine which teams are GeoPlunging (see description in the overview).

Step 2A: Players for each team stand up and turn around so that their backs are facing away from the game table. Deal each team 7 Map cards face-down. Teams do NOT turn over or look at their cards until the dealer says, “Ready, Set, GeoPlunge!!”

Step 2B: The teams then turn around, turn over their cards, and the race begins. Each team tries to place 6 of its 7 states in alphabetical order as described in the objective and then shout “GeoPlunge!” The unused card must be turned face-down before shouting GeoPlunge.

Determining Who Wins a Race: The first team to shout GeoPlunge wins if:

Otherwise, the other team wins the race. If both teams shout GeoPlunge at the same time, the race ends in a tie unless only one team successfully completes Step 2.

Step 3: After the first race is completed, start the second race by returning back to the beginning of Step 2. If neither team wins this game after the first 2 races, the teams have a third race (unless the first two races both ended in a tie, in which case this game ends in a tie). Do not shuffle the cards between races. The cards used in a race should not be used in any later race during this game.

Objective: A “trick” consists of two cards, one from each team. Each team tries to win as many tricks as it can. Two things determine who wins each trick: (1) the base for the trick, which in this game is either 1 or 50, and (2) the state rankings of the cards played in the selected category. The selected category for a trick will be either size, statehood, or population.

Step 1: Deal 9 GeoPlunge cards to each team face-down. After looking at its cards, each team discards 1 card from its hand, face-down, so that each team has 8 cards.

Step 2: Determine which teams are GeoPlunging for this game (see description in the overview).

Step 3: The teams then play 8 tricks, one at a time. Whichever team wins a trick is the lead team for the next trick. 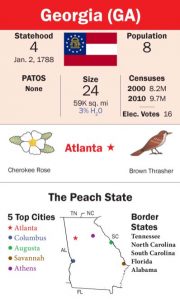 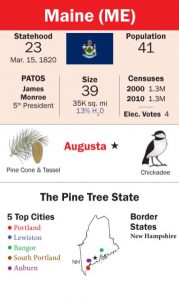 Examples: The lead team plays Georgia face-down, announces “Statehood” and a base of 1. It will win the trick unless the other team plays a card with a statehood ranking of 1, 2, or 3.

The lead team plays Maine face-down, announces “Population” and a base of 50. It will win the trick unless the other team plays a card with a population rank of 42 or higher.