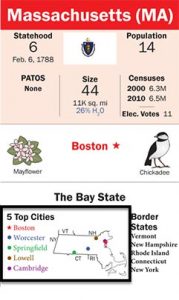 Knowledge:  Identifying five of the largest cities in each state

Objective:  Students will learn five of the largest cities, “top cities”,  in each state as well as understand why learning this information is important.

Use the “Introduction to GeoPlunge Cards”  lesson prior to practicing with these cards.  This activity may be done as a whole class or a small group.

Before playing the first time, teacher will engage students by asking probing question(s):

Remind students where to find the information on the GeoPlunge cards.

Cards Used: GeoPlunge cards and Power cards.  Shuffle the cards before the game begins.  Place the used cards at the bottom of their decks.

Objective: This game is a series of contests.  For each contest, each team has up to 3 guesses to guess the state held by its opponent. Each team receives one or two new clues before each guess, as determined below.   A team earns 2 points for winning a contest, and teams receive 1 point each for a tie.  Continue playing contests, one at a time, until one team wins the game.  A team needs 10 points to win. 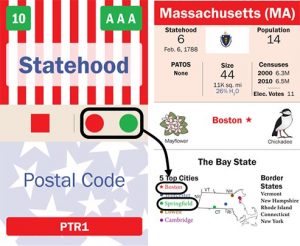 Step 1:   Determine who guesses first.  Deal each team one GeoPlunge card face down.  Each team may look at its card but should NOT show its card to its opponent.

Step 2: Turn face-up the top Power card in the deck.   The first clue giving team uses the color of the circle(s) to give one or both of the top five cities on its card. (Some cards have 1 circle and others have 2 circles.)  For example, if the circles on the Power card are green and brown (see example), the first clue given would be the Green Top City, shown in green, and the Brown Top City, shown in brown.

Step 3: The first guessing team has up to 3 guesses to try to guess the state of the GeoPlunge card in the other team’s hand.  A new Power card is turned up before each guess and placed next to the previous Power card. If the same clue is turned over, no additional information is provided, but teams may make another guess.

Breaking down the deck: There are four US Regions  based on the United States Census Bureau.  Different resources, however, identify different regions and states per region.  Use the resources that work best for your learning goals.