Objective: This game is a series of state trivia contests. For each contest, each team has up to three guesses to guess the state held by its opponent. Each team gets one new clue before each guess. A team receives 2 points for winning a contest and it also has an opportunity to receive a bonus point (i.e. a third point) as described below. If a contest ends in a tie, each team receives one point. Play state trivia contests one at a time until one team wins the game. A team needs 15 points to win the game.

For each state trivia contest:

Step 1: Deal each team 1 GeoPlunge card face-down. Each team looks at its card but should NOT show its card to its opponent. 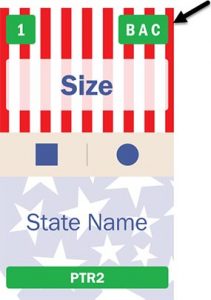 Step 2: The dealer then turns the top Power card in the deck face-up. Teams use the order of the letters A, B, and C in the upper right corner of that Power card to give clues from the Clue cards before each guess. 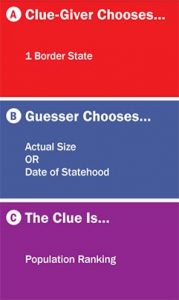 For Type A and B clues, there usually will be options for which clue is provided as described by the Clue card. If the clue-giving team is required to show its opponent the state flag, use the cut-out card to hide all of the information with the exception of the state flag.

Step 3: The first guessing team has up to 3 guesses to try to guess the state of the GeoPlunge card in the other team’s hand.

In Level 4, each team tries to guess as many states as possible from the other team’s hand. The only other ways in which Level 4 differs from Level 3 are as follows:

For the first and second guess:

Whichever team correctly guesses more states from the other team’s hand wins the state trivia contest and earns 2 points. The winning team receives the bonus point (i.e. three points total) if it correctly guesses three different states from the other team’s hand (i.e., it it did not make any incorrect guesses). If neither team guesses any states correctly or each team guesses the same number of states, the contest ends in a tie and each team receives 1 point. In addition, if the second team to guess has already won before it has made all three of its guesses it should continue guessing if it still has the opportunity to receive the bonus point.